This fashion epoch especially known for the geometrical lines, natural body contours were hidden completely. In particular, the Spanish fashion is the highlight of tailoring.﻿ 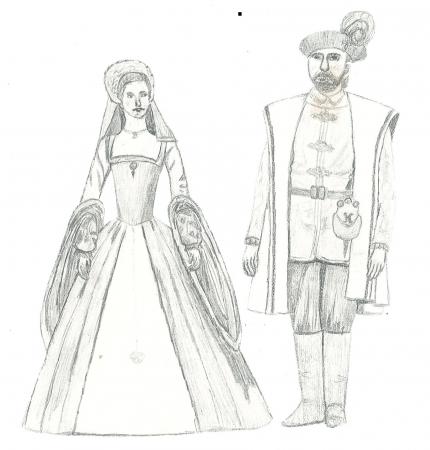 Geometric lines hid the body shape. Precious objects of the „new world“ (India and America were meant) were shown on the clothes. Everybody carried his jewels and his gold with himself on the clothes, because there were no safes.﻿ 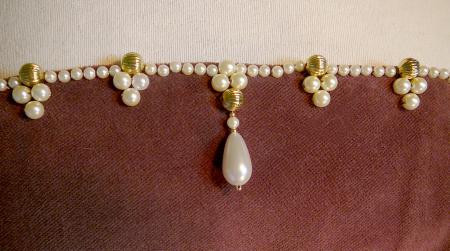 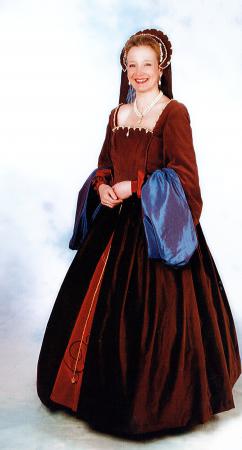 Tudor hoop skirt
The hoop skirt is held by a drawstring and tied on the left. In addition, you wore a padded roll around the hips, the "Bum Roll". This Bum Roll was during the Renaissance in fashion everywhere.﻿

I have copied my dress to the English Tudor style at the time of Anna Boleyn. It incorporates a petticoat and corsage with big sleeves. Typical is the conical skirt and the level held corsage. Curvatures should so be hidden.

The Tudor dress can be worn with or without a skirt over.

Dress with petticoat and bodice﻿

Dress with overskirt and back view. In the gallery you see pictures where I'm wearing the dress.

Pomander
The skirt of the Tudor dress adorned a hanging chain around the waist line with the attached Pomander, a round little spice box, also called a spice can. In it were aromatic spices whose smell would protect of illness.
Here is instead of the Pomander a crown on a hanging chain, because spice boxes or spice cans are hard to be found today and are also very expensive.
﻿ 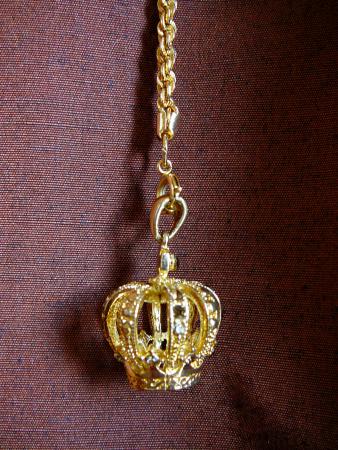 Conversion is possible
The corsage is interchangeable against a Middle Age upper top. The hoop skirt is left out. This one can dress, according to mood as an Anna Boleyn or as a noble lady of the Middle Ages.﻿ 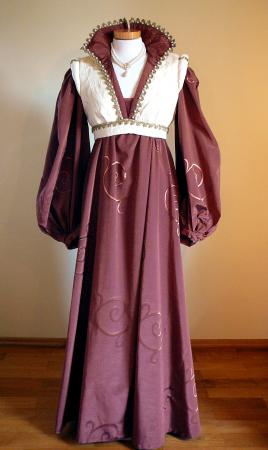